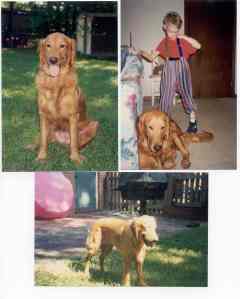 When Sadie, our Golden Retriever, came to live with us it was because we had tried everything else. Despite our efforts and that of medical science our then ten-year-old son, Daniel, hadn’t been able to gain any weight since he was three. In fact, he was so medically fragile that he couldn’t attend school. Daniel has Downs Syndrome and is profoundly retarded but his “failure to thrive” was not a result of the Downs. The inability to gain in spite of a healthy appetite was a mystery. Though he seemed perfectly happy at home, we couldn’t help but think he had to be lonely. When we learned, through a program called Pet Partners, that there are dogs trained specifically for children like Daniel we had to give it a try. Imagine our delight to find that one of the best trainers in the country, Connie C. , lived only a few miles away. Connie invited us to come to her training facility. She wanted to meet Daniel, and the rest of our family to see if we might be viable candidates for a specially trained dog. Connie concluded that a companion dog could be a good thing for Daniel—well, at least it was worth a try—but she cautioned that we may have a long wait ahead of us. Finding the right dog for a special child sometimes takes years. It was only eight months later when Sadie came to stay. Though an affectionate child at times, Daniel often lives in a world of his own, watching his hands move or experimenting with new motor-boat sounds. The challenge would be to get him to pay attention to Sadie—to get them to bond. So we carefully followed Connie’s instructions. Sadie slept in Daniel’s room. When I fed Sadie I put Daniel nearby so they could “visit” at mealtime. I made her lay by him while the other kids were at school, she rode right beside Daniel in our van as I taxied his siblings to their activities. In spite of all our efforts, however, it was hard to see any progress. The evidence was scant that any bonding was occurring. But one afternoon as I drove to pick my daughter up from school I glanced in my rearview mirror and was surprised to find Daniel’s arm around Sadie. Her head rested on his chest, and his head rested on hers. Daniel had a friend. A few months after Sadie came to live with us Daniel had a check up. He had gained three pounds. Sadie* was good medicine for all of us, but for Daniel she was a miracle.

One thought on “Good Medicine”